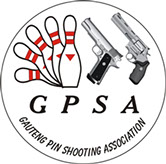 Minimum firearm requirements to participate in the 5 Core events is a Pistol and a Revolver.

An array of firearms may be used, depending on the specific event. This ranges from .22 Handguns, Magnum Revolvers, most caliber Pistols, Shotguns, all the way to large caliber Semi-Automatic Rifles.

The basics of Pin Shooting is to clear all of the bowling pins off a table, which is 7,6 meters away, in a maximum time of 40 seconds. Times are recorded and any pins left on the table counts an additional 2 seconds to your time. The different events have varying numbers of pins on the table and in different configurations.

The full SAPSF Rule Book can be viewed by clicking this link.